Hi, Internet! Today I’ll show my favorite college portfolio poem, but first look what I made:

It’s a voice over demo for my cat, Misu! As a kitten, she used to audio-bomb my recordings all the time. She hates doors being closed, so if she’s not sleeping when I get in my booth, she may cry and scratch at the door, or she’ll throw her toys underneath the door. Since she wanted in the booth so badly, I brought her in and used treats to make her meow in the mic. I love producing audio, so this was a great oppurrrtunity to make a demeow. Despite the fact Misu’s mic technique is iffy, her demo turned out adorable.

Now onto the poem. It is an Ekphrastic Poem (writing that comments upon another art form). When 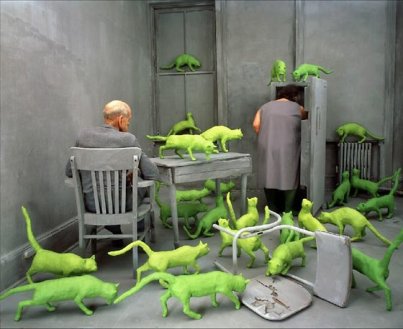 asked to do this for class, my thoughts immediately went to two things: Children’s Literature and my favorite artwork from my freshman art appreciation text book, Radioactive Cats by Sandy Skoglund . This was my favorite piece of the whole semester, and it sparked my passion for writing books and poems for kids.

Old man Mully and his wife
were friendly, feeble and kind.
They were a quirky couple
because both were colorblind.

They could not see red, blue nor green,
and on one cheery day
they chose to paint their worn-out house
in sixteen shades of gray.

Mrs. Mully sent her spouse
for more paint in the city,
and on his way home from the store
old man Mully found a kitty.

He took the cat home to his wife.
She fed it bread and jelly,
and fishy fish and scrambled eggs,
and then she rubbed his belly.

The green cat liked his brand new home,
the Mullys and the food,
but something still was missing
so he climbed the roof and mewed.

“Meow meow meow meow”, said the cat,
and then without delay
a spaceship landed in the yard.
His friends had come to play.

Forty five fluorescent felines
came from outer space.
They pranced and danced across the yard
and climbed the fireplace.

The space cats found the kitchen
and broke the icebox door.
They feasted, nibbled, slurped and ate
until there was no more.

The Mullys woke-up and where shocked
to see and to behold
a spaceship on their lawn
and cats bombarding their abode!

“What will we do with all these cats?”
asked the old man with dismay.
“We are outnumbered”, said his wife
“I guess we’ll let them stay”.

The space cats lined up single file
and skipped out the front door.
They hopped and flopped into their ship
and took-off with a roar!

“Mysterious”, said old man Mully
“You don’t look out-of-place.
How could such a normal-looking cat
Have friends from outer space?”

The Mullys kept their space cat
and never had a clue
that the pet they saw as commonplace
had a glowing, greenish hue.

Fantastic Voiceover? How About PRENTASTIC VOICEOVER?!?! I'm Prentice Osborne, a full-time, freelance voiceover talent out of Atlanta. My specialty is Millennial, teen and everything in between, and I work in multiple genres of VO, from e-learning to games to cartoons to radio and TV ads. I love the entire VO process, from pen to paper, mouth to mic, cursor to waveform. It's totally Prentabulous! Need some voice work? Bring it on, World! Freelance Prentice is here to blow your mind with laughs, creative magic, mad skills, and a little bit of razzle dazzle!
View all posts by purrrentice →
This entry was posted in cat poem, cats, Childrens' books, Demo, Fanfic, Funny Poetry, kitties, Lolcat, poetry, Voice acting, writing and tagged audio production, Ekphrastic Poem, meow, Radioactive Cats, Sandy Skoglund. Bookmark the permalink.