I’ve have been quite the jet setter this summer. I went to Texas, New Orleans, Savannah, North Carolina, and I’ll be hitting Destin and St. Augustine soon, too. And let’s not forget Dragon*Con in a few weeks! I didn’t get nearly as much writing done as I should have, but I did play Organ Trail a lot…so much that I want to do a review.

So basically, Organ Trail is a remake of The Oregon Trail  by The Men Who Wear Many Hats. Instead of pioneers in a covered wagon seeking a better life, it is the story of The Zombie Apocalypse. After the zombie outbreak, some towns are nuked, and you must lead your party in a station wagon across the country to the one safe haven! You can still get the signature, Oregon Trail diseases, like Cholera, Typhoid and Dysentery, and there are all kinds of new problems the RNG (Random Number Generator) Gods can send your way, like getting bitten by a zombie or kidnapped by a bandit or attacked by a zombie bear, or losing cash in the seat and never finding it again! I have played this game over and over, and I finally beat it in Suicide Mode. I am one proud gamer gal!

What I Don’t Love About The Game 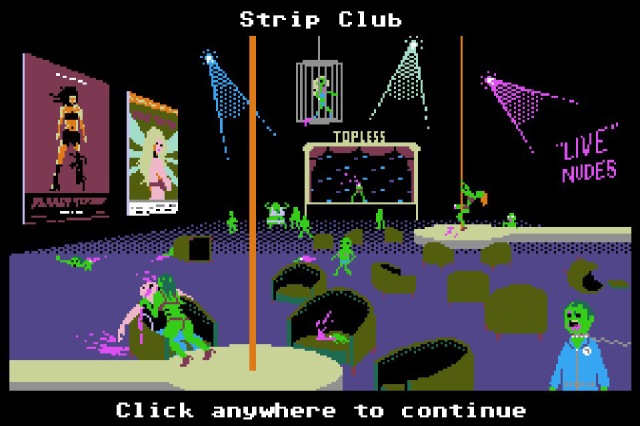 And there are zombie strippers?! What else could you possibly as for?!

Fantastic Voiceover? How About PRENTASTIC VOICEOVER?!?! I'm Prentice Osborne, a full-time, freelance voiceover talent out of Atlanta. My specialty is Millennial, teen and everything in between, and I work in multiple genres of VO, from e-learning to games to cartoons to radio and TV ads. I love the entire VO process, from pen to paper, mouth to mic, cursor to waveform. It's totally Prentabulous! Need some voice work? Bring it on, World! Freelance Prentice is here to blow your mind with laughs, creative magic, mad skills, and a little bit of razzle dazzle!
View all posts by purrrentice →
This entry was posted in Gaming, parody, Pole Tricks, shenanigans, Stripper Shoes, Twilight Sparkle, Uncategorized, Zombies and tagged Dat Ass, gaming, Organ Trail, PC Games, Planet Terror, Zombie Strippers. Bookmark the permalink.