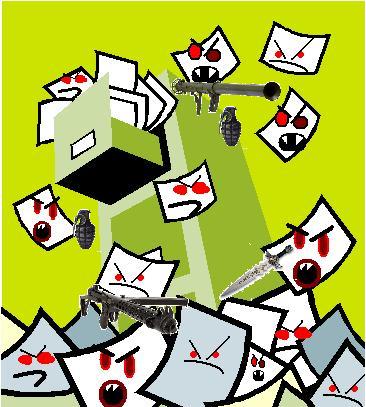 Anybody who has ever talked for me for more than an hour or so probably knows that I hate doing timesheets at work. It’s my least favorite task. I’ve gotten pretty good at finishing them quickly though, much like ripping off an adhesive bandage. I honestly don’t know why this particular system is used because it is inefficient and archaic. I was freaking ecstatic back in January because one region was going to start using an online system to log time and sales, thus relinquishing me of a portion of my task. It wasn’t a huge percentage, but it was significant enough to shave-off some time from the timesheet data entry process.

Well, this week I kicked the timesheets’ ass, but they had reinforcements…

Executive Somebody decided he/she wants the data from that region in the Excel sheet (even though it is not necessary), so now I have to log seven months worth of fake timesheets into the system for a whole region.

When timesheets attack, they fight dirty!

Fantastic Voiceover? How About PRENTASTIC VOICEOVER?!?! I'm Prentice Osborne, a full-time, freelance voiceover talent out of Atlanta. My specialty is Millennial, teen and everything in between, and I work in multiple genres of VO, from e-learning to games to cartoons to radio and TV ads. I love the entire VO process, from pen to paper, mouth to mic, cursor to waveform. It's totally Prentabulous! Need some voice work? Bring it on, World! Freelance Prentice is here to blow your mind with laughs, creative magic, mad skills, and a little bit of razzle dazzle!
View all posts by purrrentice →
This entry was posted in Bazooka, blogging, Blues, Bull Honkey, chores, epic fail, executives, Need New Job, office, shenanigans. Bookmark the permalink.