Bloggin’ at the Bottom of the Food Chain 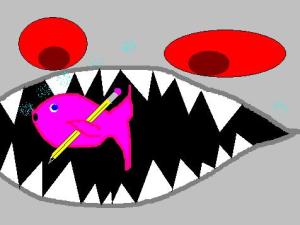 Blogger Bass says "I may have to blog about this later..."

Writing is dangerously undervalued in the business world. I know there are good writing jobs out there, or at least that’s what I like to believe (though most job search engines have yet to prove this), but look at all these writers being paid through pay-per-click sights, where they get a penny per viewing, or receiving a measly five to ten bucks per article. That’s BS. I doubt the graphic designers in the marketing department here get paid a few bucks per photoshopped product image. Sheesh. We do have one copywriter though. Maybe one day they will need a second?

Anyways, I’ve been writing these articles for ten months now. I try to keep the Beauty Blog fresh, interesting and personal whilst doing all the other crap I do around here. That’s why I’ve only written 17 (Only 15 were published). It’s not that I can’t write fast. Fridge poems should prove that. I simply have other (not better) things to do, like label hundreds of DVDs and hand-address Christmas cards.

This week my article about Demi Lovato was made live. The poor Disney star admitted herself into rehab for problems with bulimia and self-mutilation. I feel for her. I really do. That’s why I had to write this article, and I’m glad it was received well. I had my doubts. I hate how our media and social standards have made so many women, including myself, have insecurities regarding body image. F#@* the six-foot-tall, 80 pound models that the media seems to ooh and ahh over. Those chicks need to eat a steak burger, stat. Poor things, well, unless they are like my best buddy Morgan. She has an overactive metabolism. She could eat fifty steak burgers and still be super slender. Don’t you roll your eyes! She hates that. When she loses five pounds, she gets just as pissed as I do when I gain it. 🙂

You would think that working in a skin care and beauty business would make me feel pretty. Wrong. I won’t go into too many details, but no. . Actually, I often feel the opposite when I’m there. I wrote about this once on Reception Perception.

Maybe someday I will be able to make some moolah with my mad writing skills, but until then, I’ll be bloggin’ at the bottom of the food chain, gratis, like Blogger Bass.

Fantastic Voiceover? How About PRENTASTIC VOICEOVER?!?! I'm Prentice Osborne, a full-time, freelance voiceover talent out of Atlanta. My specialty is Millennial, teen and everything in between, and I work in multiple genres of VO, from e-learning to games to cartoons to radio and TV ads. I love the entire VO process, from pen to paper, mouth to mic, cursor to waveform. It's totally Prentabulous! Need some voice work? Bring it on, World! Freelance Prentice is here to blow your mind with laughs, creative magic, mad skills, and a little bit of razzle dazzle!
View all posts by purrrentice →
This entry was posted in blogging, epic fail, office, porno, receptionist, sharks, shenanigans, Uncategorized, writing. Bookmark the permalink.

2 Responses to Bloggin’ at the Bottom of the Food Chain