When we shatter Earth, we do so with rainbows, glitter & Lols.

You may have felt a slight earthquake beneath your feet a week ago. Sorry about that. It was just Joie and me creating another Earth shattering collaboration. It’s been a while, so the world was less prepared for it than usual. I mean, the last technical collaborative projects we’ve done were her Gummy Troubles animatic and my Zombie Robot Sonnet from last Valentine’s Day. Yikes! It’s been too long!!!!!! Not to worry though! We put our heads together and actually executed an idea, rather than just rant about how fun it would be to do it (we come up with 1,000+ ideas a week, and very few make it to reality.) 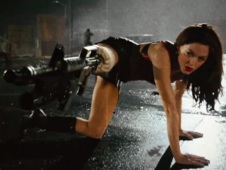 I bet this betch ♥s ponies

I had an idea a while back to do a My Little Pony Friendship is Magic comic about ponies with lame talents. I often quote Cherry Darling from Planet Terror about my “useless talents,” and I thought it would fit into pony world. I mean, not all unicorns can have a cutie mark for magic like Twilight Sparkle. Life ain’t fair, but it sure is funny!

Anyways, Joie added the perfect perspective to this idea: The Pony Unemployment Office! She texted me on New Year’s Eve, and I dunno if it was the champagne and explosives or my recent and ridiculous experiences dealing with unemployment. Either way, it stuck, and inspiration was born. The next day, Joie designed the main government worker character, a big-haired, large and in charge pony named Red Tape (Red for short), and within 24 hours our Cutie Mark Fail Tumblr was born. When Joie & Prentice get the creative itch, things happen quickly. I write stuff. Joie draws stuff. We infuse it with friendship  Wave an Internet Wand. Magic happens.

Basically, Cutie Mark Fail  is like Ponies, Receptionist on the Verge and my tales of the unemployment office had a threeway love child. The reader follows Red as she deals with the weirdest ponies with the lamest talents and cutie marks. She tries to find work for them…tries…but she often just sasses her way through the day and counts down to Friday!

Fantastic Voiceover? How About PRENTASTIC VOICEOVER?!?! I'm Prentice Osborne, a full-time, freelance voiceover talent out of Atlanta. My specialty is Millennial, teen and everything in between, and I work in multiple genres of VO, from e-learning to games to cartoons to radio and TV ads. I love the entire VO process, from pen to paper, mouth to mic, cursor to waveform. It's totally Prentabulous! Need some voice work? Bring it on, World! Freelance Prentice is here to blow your mind with laughs, creative magic, mad skills, and a little bit of razzle dazzle!
View all posts by purrrentice →
This entry was posted in BFF, blogging, Bronies, Cutie Mark, epic fail, Fanfic, Illustrator, Job hunting, Joie Brown, My Little Pony, Need New Job, office, Rainbows, Receptionist on the Verge, Twilight Sparkle, Uncategorized, writing and tagged Comic, Cutie Mark Fail, Planet Terror, Red Tape, tumblr, unemployment. Bookmark the permalink.