This morning I made a Facebook post about the weird dreams I had last night, and a friend of mine said I should add crazy dreams to the nonsensical musings that are my blog. So be it.

Before bed, I watched too many episodes of Know Your Meme on Youtube. This would explain why I had a weird

dream that I went to a very strange strip club. It was a meme club, and it was horrifying and hilarious in tandem. None of the dancers got naked. Thank God. I remember seeing Boxxy and Creepy Chan pole dancing and looking…well. creepy. There was a cartoon badger hopping at a table with a bunch of singles in his hand, and I couldn’t decide whether I wanted to stay there or not. Then I thought “Maybe I should dance here. ” The girls were making a ton of

money and weren’t even taking off their clothes. Thank God. I remember there were white-ish walls, and I had a pink drink in hand. The lights were very blinky and colorful, like a double rainbow. This dream was over 9000 unsettling, and I wanted to Keyboard Cat it out of my mind.

Anyways, I took yesterday off to do an Honest Tea event at Coca Cola. It was a lot of fun, and I hope they use me more often now that they’ve witnessed the awesomeness that is my skills. I came back today with people going “Where were you??!!” Take a deep breath, people. I also got a snarky e-mail about some important package. Whatever. I’m not even going to go there today.

What bugs me most about leaving is when my replacements get trolled and bullied in my stead. There was a diva moment about that package, and there was also some epic “Get me Starbucks” drama that went down. Just hearing the stories made me angry, so I that made me feel extra bad for her because she was insulted and clueless as of what to do. I don’t like it when people look down on me or my girls because of our position. I mean, who do you think you are? Somebody needed a time-out yesterday. I then thought about time-out corners, and then I thought about how we should devote an office to be a time out corner. I then thought about spoiled kids being sent to their rooms and how angry they get, despite the fact they have video games and tv in there. This brings me to this final idea: Time-out in the Corner…office. I felt the need to express this idea with a bad cat comic: 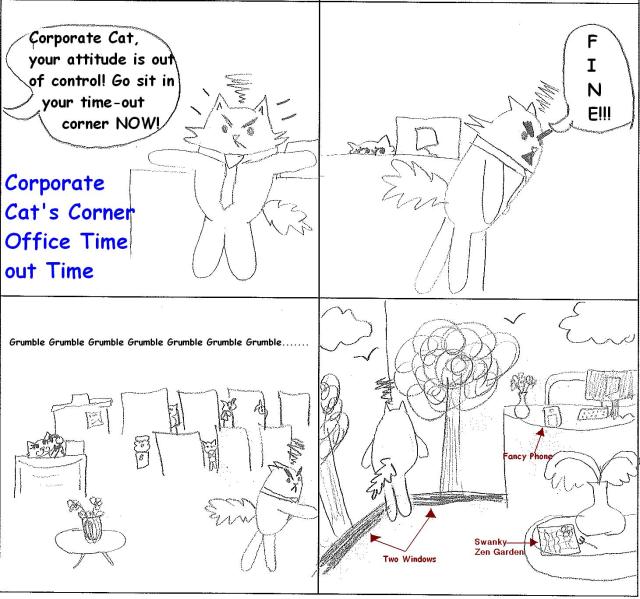 I think it should be legally required for everybody to have a service or service-like job for at least six months. It’s humbling and builds character…….and patience.

Fantastic Voiceover? How About PRENTASTIC VOICEOVER?!?! I'm Prentice Osborne, a full-time, freelance voiceover talent out of Atlanta. My specialty is Millennial, teen and everything in between, and I work in multiple genres of VO, from e-learning to games to cartoons to radio and TV ads. I love the entire VO process, from pen to paper, mouth to mic, cursor to waveform. It's totally Prentabulous! Need some voice work? Bring it on, World! Freelance Prentice is here to blow your mind with laughs, creative magic, mad skills, and a little bit of razzle dazzle!
View all posts by purrrentice →
This entry was posted in Badger, blogging, Boxxy, cats, Creepy Chan, Dreams, managers, office, receptionist, shenanigans. Bookmark the permalink.

1 Response to Attitudes and Strange Dreams