Posted on November 3, 2010 by purrrentice

Have you ever been at a point in your life when losing just seems to be the norm? Wouldn’t it just be nice to win one? It doesn’t matter what, but I just want a tiny sample of success, so I can remember how it tastes. So far my first novel, which I will post more about someday, has received, like I dunno, 12 or 13 rejection s. I still have my lame job, and all the obnoxious tasks I’m forced to do keep me from making much progress in my writing. Heck! I couldn’t even win the t-shirt design or pumpkin carving contest! And don’t even get me started on winning the Yoforia facebook trivia challenge on Tuesdays!!!

The company I work for participated in the Heart Walk this weekend, and we wore the winning shirt. I don’t remember what it looked like because the design was very dull and corporate-y. It had some logo with some lackluster phrase on the back. Joie Brown and I collaborated to design the best shirt ever, and though I think it could have been a contender for the charity’s cool shirt competition (I saw a few funny and cool ones while being a brand’s booth babe), the awesomeness was not understood in my high-strung office, so our shirt only got one vote. Marketing had all this fun wiggity-woo technology to make their shirt templates, but Joie and I had a pad of paper, a scanner and the power of imagination! I forgot only creativity within reason is acceptable here. Oops. 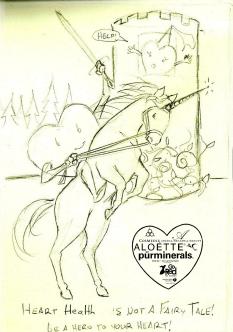 I would totally wear that shirt!

As for the pumpkin carving contest, I was sure out of the office building tenants, I would make one of the top three pumpkins. Wrong.  I can totally see why the winners were winners though. Apparently, a group of excited friends with a vision make a better jack-o-lantern than one hung-over Prentice. At least I still received a five dollar Starbucks gift card for my trouble. I do love a free, soy, green tea latte! 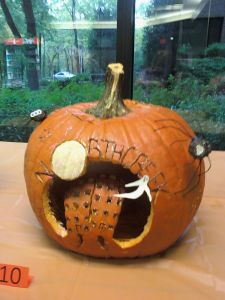 I took this a few days after the contest was over. It now looks about as hung-over as I was when I made it.

You know what would be even better than free coffee? Free yogurt, and that’s why I try to participate each week in Yoforia’s  trivia challenge for a 20 dollar gift card. I always come close, but I never win. These past two weeks had bogus questions and winners. I need to stop trying that one. Doing those God forsaken timesheets each Tuesday makes me bummed enough, so when I lose the trivia, it’s just another slap in the face. All I want is a little glory in the form of a gift card. Sheesh.

Oh yeah. I forgot. This blog is about my writing…not me whining. Well, when I get busy and flustered on Fridays, Like I obviously am today, I often resort to writing limericks because they are silly and easy. The usually go over pretty well. I pretty much consider myself the Limericks Luchador Here is the original:

When your food is forgotten and old,
It gets yucky and covered in mold,
That’s why the fridge shall be clean,
After five fifteen,
So be warned, for you have been foretold!

I also did one for St. Patty’s Day:

A leprechaun has been lurking,
In the fridge while you’ve been working.
With a food-snatching jive,
At a quarter past five,
He’ll be irking us all with his shirking!

I write them when I forgot to write a poem, and I only have five minutes to make one:

Today I’m too busy to rhyme,
Let me help you help me save time,
Go get your food, please,
All your drinks, fruit and cheese,
Or at 5:15 it shall be mine!

And I use limericks to jazz-up other boring memos, like needing to pick-up boring t-shirts for the heart walk:

Are you attending the Heart Walk tomorrow?
Then Steph has some shirts you can borrow!
Lest you want to walk nude,
Which would be lewd and rude,
To Stephanie’s desk you should follow!

Or to announce there are donuts in the break room:

If you’re feeling sleepy and tired,
And you’d rather be chipper and wired,
To the break room, please go,
Grab a sweet nut of dough,
And you will feel a rush, as desired!

(Our CIO debated that I failed to mention the sugar crash, so I responded to him with yet another poem:

Sugar can make you quite happy,
It’s yummy and super-dee-dappy,
But an hour or so later,
You’ll be a hater,
For the sugar crash makes you feel crappy.)

Fantastic Voiceover? How About PRENTASTIC VOICEOVER?!?! I'm Prentice Osborne, a full-time, freelance voiceover talent out of Atlanta. My specialty is Millennial, teen and everything in between, and I work in multiple genres of VO, from e-learning to games to cartoons to radio and TV ads. I love the entire VO process, from pen to paper, mouth to mic, cursor to waveform. It's totally Prentabulous! Need some voice work? Bring it on, World! Freelance Prentice is here to blow your mind with laughs, creative magic, mad skills, and a little bit of razzle dazzle!
View all posts by purrrentice →
This entry was posted in blogging, epic fail, Halloween, inspiration, limerick, office, receptionist, sharks, shenanigans, Uncategorized, writing, yogurt. Bookmark the permalink.

4 Responses to Losing and Limericks