Have you seen this “First Seven Jobs” thing floating around on the interwebz? It started with celebrities being asked what their first seven jobs were, so all us non-famous folk can say to ourselves “Whaaaaa? Famous people are normal people who had normal jobs?! Now they seem so relatable, and I feel good about my life now. Move over [insert job here]!! I’mma make it big one day! BIGGG!”

I bet Colbert was the best lunch lady ever!!!!

Lol. Anyways, my voiceover success story stems from a Job Journey fueled with fear of hating what I do forever and learning lots about myself. I mean, my whole spiel is that I escaped the jobs I couldn’t stand and fled to Freelance Land, a magical place where I am my own boss and LOVE what I do. That being said, the First Seven Jobs thingy is so relevant to my life that I felt it warranted a blog post.

About five years after Job 7, I became a full time voiceover talent. I’m not famous…….yet…..but I think this goes to show that finding a fulfilling career is possible. I sometimes wish I had found VO sooner, but you know what? As not fun as it is, learning what you absolutely DON’T want to do is just as important as figuring out what will make you happy. If nothing else, it builds character, right? 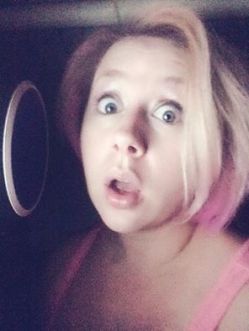 Fantastic Voiceover? How About PRENTASTIC VOICEOVER?!?! I'm Prentice Osborne, a full-time, freelance voiceover talent out of Atlanta. My specialty is Millennial, teen and everything in between, and I work in multiple genres of VO, from e-learning to games to cartoons to radio and TV ads. I love the entire VO process, from pen to paper, mouth to mic, cursor to waveform. It's totally Prentabulous! Need some voice work? Bring it on, World! Freelance Prentice is here to blow your mind with laughs, creative magic, mad skills, and a little bit of razzle dazzle!
View all posts by purrrentice →
This entry was posted in Acting, Job hunting, Promos, Voice acting, Voice Over, voiceover and tagged brand ambassador, Career, FirstSevenJobs, Promo Girl, voice acting, Voice Over. Bookmark the permalink.